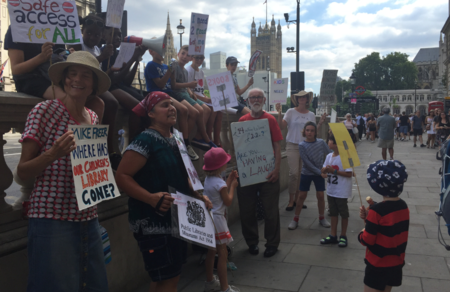 “We were a group of adults and kids chanting outside the minister’s department, holding up our signs and singing through the megaphone. There were also kids who climbed up onto the stone wall and waved their signs and took turns with the megaphone, chanting.”  -- Raphael Marshall-Strang, age 9, describing the protest.

Children from Barnet with their parents and grandparents delivered an invitation to the Department for Digital Culture Media and Sport (DCMS) to the new Culture Secretary, Jeremy Wright QC, to come on a tour of Barnet Libraries in September 2018. It was handed over to DCMS representatives Simon Richardson, head of libraries, who has been handling the Save Barnet Libraries’ complaint and his colleague Sheila Bennett, head of libraries strategy and delivery and head of the libraries task force team.

Erini Rodis of SBL, who attended the protest with her two children says:

“The protest went very well and we hope the new Culture Secretary will accept the children’s invitation to be shown around Barnet libraries. I think it would really help him to understand what it’s like when pin codes replace staff and children and many other vulnerable users have very little access to the library. We need the staff back”.

Rob Strang, who helped to draft the SBL complaint and attended the protest with his children says:

“We spoke to officials from the department who work on the libraries team, who assured us that they are taking our complaint seriously and treating it with care. But there is little evidence of those assurances in the actions of their political leaders. It has been 19 months since we made our complaint. The Council is in breach of its obligation to provide a comprehensive library service. The Secretary of State has a statutory duty to enforce that obligation. When will the Ministers observe the law and take up their legal duties?”

Emily Burnham of SBL who attended with two of her children says:

“We have submitted substantial evidence to DCMS and it’s time for an answer! We hope that the new Culture Secretary will realise that access to staffed libraries is a crucial issue. We know that library use has dropped drastically over the past year. Last year’s summer reading challenge failed – there were only 1500 entries compared to 4000 the year before the services were cut. Hugh Vivian, the head teacher of Hollickwood Primary in N10 wrote to DCMS saying that he had to send families to the libraries in nearby Haringey because of the lack of provision in Barnet! Of the 187000 library card holders in the borough, only about 18000 have applied for a pin code to use the unstaffed libraries– that really shows how off-putting the new system is.”

Emmanuel Amevor who attended the protest with his grandson says:

“My grandson was a regular user of our local library on Golders Green Road, before we were locked out. We were very happy to be part of the noise making on this protest. We hope the powers that be will take notice”.

Umeyma Sahal age 16, who has just finished at the Archer Academy, couldn’t attend the protest but is keen to show her support:

“In the house it’s quite noisy so the library would be the perfect place to study. I tried to use it but with the new pin code system I needed to get permission from the school and my parents before I could get in. I had enough to think about with studying for my exams and I ended up using the school classroom to do my GCSE revision instead.”

Children who attended the protest say:

“I hope the Culture Secretary comes down to visit us so we can show him around. I am about to go to secondary school but I still can’t get in to my library most of the time” Jake Moss, 11 years old, East Finchley

“Are we going to come and shout at the government every year? It’s not fair to be locked out of the library just because my mum forgot her card. My friend has a library card but his mum doesn’t go because she works so they can’t go into the library” Gabriel Rodis, age 6 pupil at Martin Primary School.

“I can walk home alone from school but I’m not allowed into the library on my own? Really? That’s so stupid!” Tommy Gubbins age 9 pupil at Martin Primary School.

“I’ve recently got back my GCSE options – now I need to put in hard work. I was hoping I could do it at the library but I’m under age and I can’t get in most of the time. And they’ve got rid of the study space too.” Sahr Kamanda age 14 pupil at The Compton School.

“My brothers and I used to do Kumon at the library every week and take out books too. Now Kumon doesn’t happen there anymore and I go to the library a lot less. It just isn’t the same as it was before. My mum ends up buying me more books but I can’t try them out first like I used to.” Siah Kamanda age 8 pupil at Martin Primary School.

“Libraries help kids to learn about the world and their imagination” Isaiah Akuffo, age 8, pupil at Wessex Gardens Primary School.

“Why is the library always closed? I hope they listen to us” Lottie Pearson age 7 Martin Primary School.