PLEASE JOIN US NEXT MONDAY!

STAND UP AND DEMAND YOUR RIGHTS!

CALL ON THE NEW SECRETARY OF STATE TO ACT NOW!

***Council refusing any public or democratic scrutiny of impact. No consideration permitted before November 2019***

BARNET --This weekend the UK’s annual Summer Reading Challenge kicked off as it has for the last 19 years but with one exception:  tens of thousands of children in the London Borough of Barnet will be actively discouraged from getting into libraries to keep up their reading skills and confidence.


Next Monday 23 July, children from across Barnet – whose legal right to a proper library service has been ignored -- are travelling to the DDCMS pleading for the newest Secretary of State, The Right Honourable Jeremy Wright QC, to read the Libraries & Museums Act and please enforce their rights under British law, using his ‘Section 10’ powers stipulated in the Act, to launch the inquiry which Save Barnet Libraries formally demanded over 18 months ago.  The children will also present him with an invitation to come visit Barnet and see the decimation of their library service and the impact it is having on them with his own eyes.


Despite significant public outcry, in 2017 Barnet spent £14m to ‘save’ £1.3m from the library service by removing professional librarians and installing CCTV and PIN code access the majority of the time.  Barnet deemed it could not safeguard its new staff-less libraries and therefore barred all children under the age of 18 from attending the libraries independently.  Previously almost all 10-15 year-olds, who made up 13% of all library users, went to the library freely and safely without a parent.  Even A-level students require special and onerous permission to access libraries for study. Barnet’s decision to remove toilet access and sack staff who assisted library patrons has further depressed usage amongst all age groups.


Save Barnet Libraries made a formal complaint to the Department for Digital, Cultural, Media & Sport in December 2016, before the cuts that have so diminished access and usage were made, warning of a breach of the law and the need to act speedily to prevent waste and harm.  Whilst the department acknowledged the complaint, due to Brexit and a revolving door of Secretaries of State as well as several periods of purdah, the Department has not ordered the inquiry mandated by its powers under Section 10 of the Libraries & Museums Act which gives all adults and children the right to a ‘comprehensive and efficient library service’.


Mary Beer-Cleasby from Save Barnet Libraries comments: ‘The basic functions of government, such as enforcing the law and ensuring children are not disadvantaged by short-sighted false economies, should not stop for two years. We urge Mr Wright to begin his tenure at DCMS by demonstrating common sense through using his powers to act immediately in order to prevent another summer during which children cannot access their libraries.  Once literacy is lost, it is very hard to regain it.  No matter what your politics, the last thing this nation needs right now is a reduction in literacy, skills and opportunities for its citizens and future workers.’

[ii]The total floor space after the cuts is 46,715 square feet, a reduction of about 50%. Most libraries are now half their present size.

[iii] Recently published library statistics for Barnet show there were 187,165 borrowers in 2016-17, but as of the beginning of October 2017, only 15,000 had registered for a pin code (this figure is from an interview with local MP Mike Freer, reported in the Ham & High newspaper on 4 October 2017; this may be a generous estimate because Councillor Reuben Thompstone in an interview on the same day for the Barnet Times gave the figure as 12,000).
Type your paragraph here.Type your paragraph here. 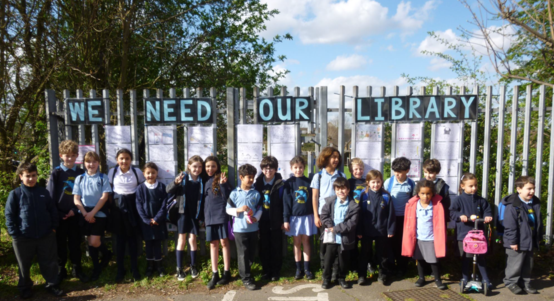